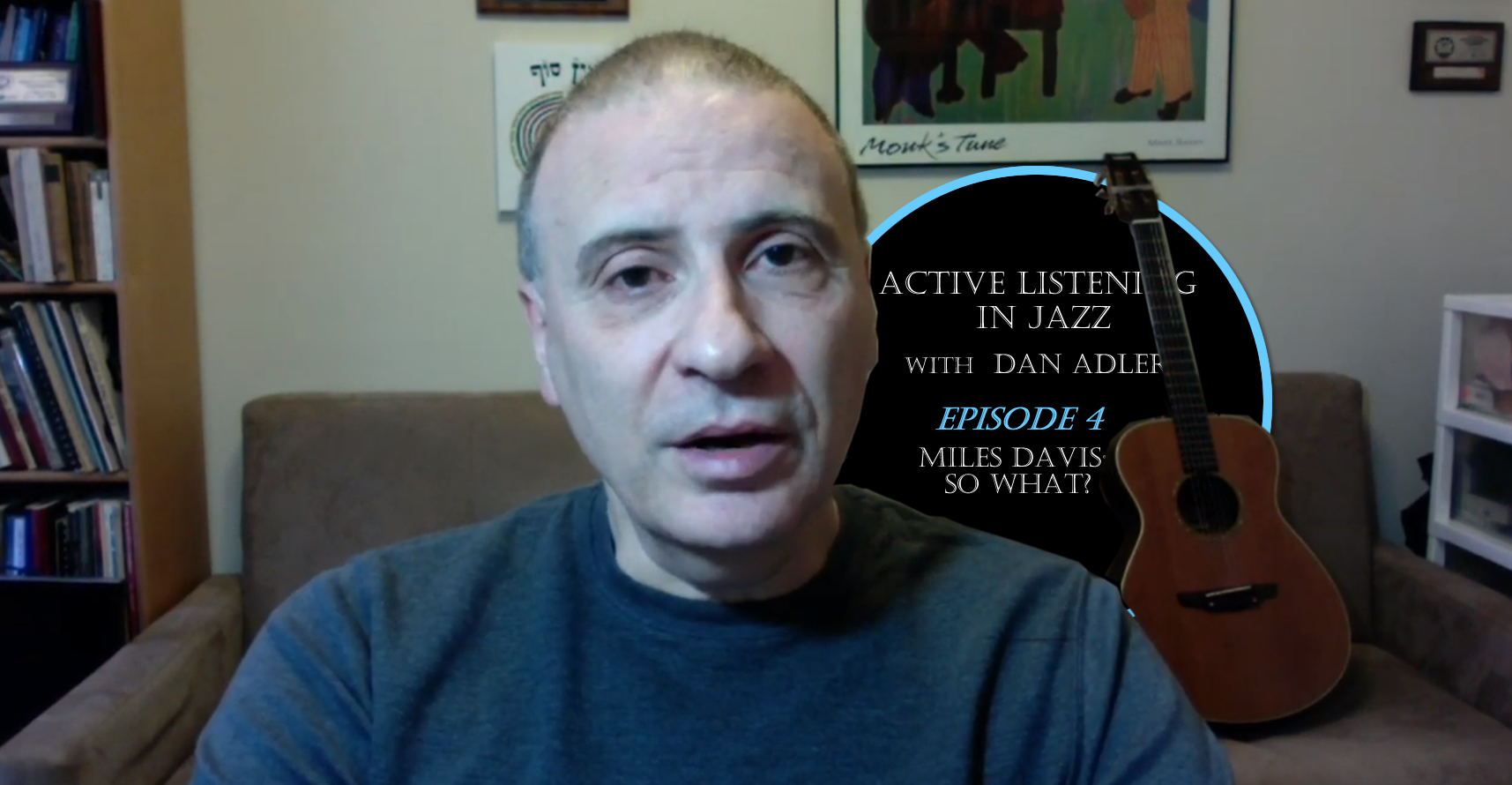 Hello everyone and welcome to Episode 4 of Active Listening In Jazz For Non-Musicians. This is Dan Alder and if you haven’t seen the previous episodes the link to the previous playlist should be below the video on YouTube. So I hope you check out the whole series.

We started talking about form in Jazz and we were especially concentrating on the Blues form as our first example.  And today we’re going to move to a 16 bar form. And now why is this important to again to understand?

As I mentioned before, Jazz like any other discipline has some rules and these rules typically are studied by musicians and known to musicians but typically not known to the wider public.  And so what I’m hoping in this series is to introduce you to some of these rules and allow you to enjoy more the way people are expressing themselves in the Jazz idiom.

And so we talked about form as a fundamental rule and the form being the number of bars that are repeating. And keep track of that form as the first wa And now we’re going to talk about the 16 bar form or 32 depending on how you count the bars. The point is 4 times groupings of 4 and basically repeated in that way. And I want to use as an example one tune that is really very well known out of probably what is considered the best selling Jazz album of all time. ‘Kind of Blue’ and this tune is called ‘So What‘. And in the liner notes, you know back in the day ~ there used to be liner notes on records. And so the original liner notes were written by the pianist on the day which as Bill Evans.

And he explained the tune in this way: “So What’, which is the name of the tune “is a simple figure based on 16 measures on one scale, 8 of another and 8 more of the first. Following a piano and bass introduction and free rhythmic style“. 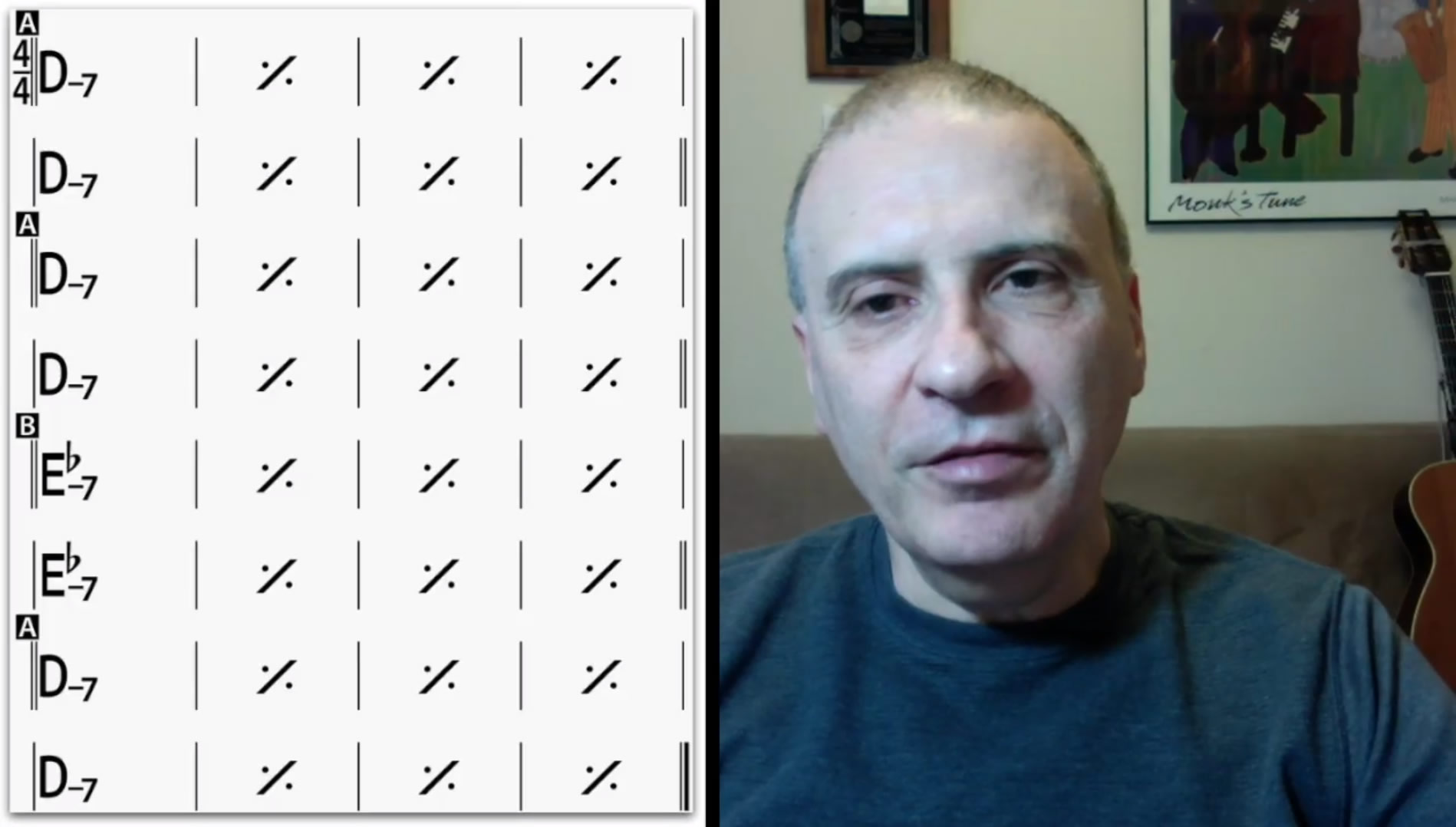 So that is what Bill Evans considers the essence of what you need to know about the tune ‘So What’. And here is the form.

So here is the form as Bill Evans explained. 16 bars of one chord, which in this case is D Minor 7. And then it goes up a half step for 8 bars.

So you can see it is going to E-flat Minor 7 and then it goes back down for 8 more bars of D Minor 7, which is the first chord. 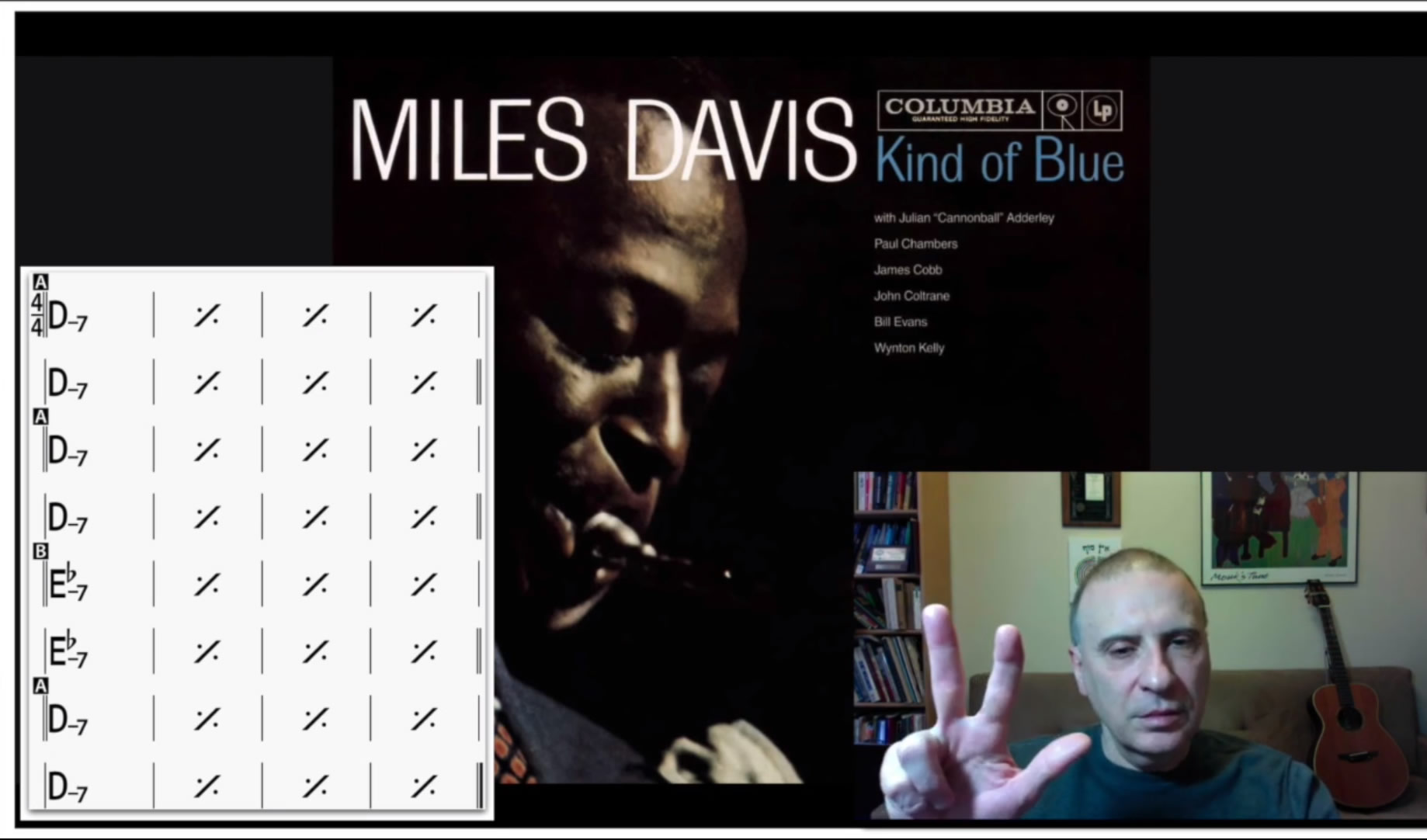 And now the improvisation is beginning on the form and we have to be conscious of where the bars are going. This is Eddie Jefferson doing ‘So What’ and he’s going to sing Miles Davis’s solo that we just heard.

So we heard the two choruses of Miles Davis in this solo on ‘So What’ first from the original recording ‘A Kind of Blue’ then from Eddie Jefferson’s vocal rendition of that. Right now we’re going to hear a John Coltrane solo on ‘Impressions’ which has the same form. 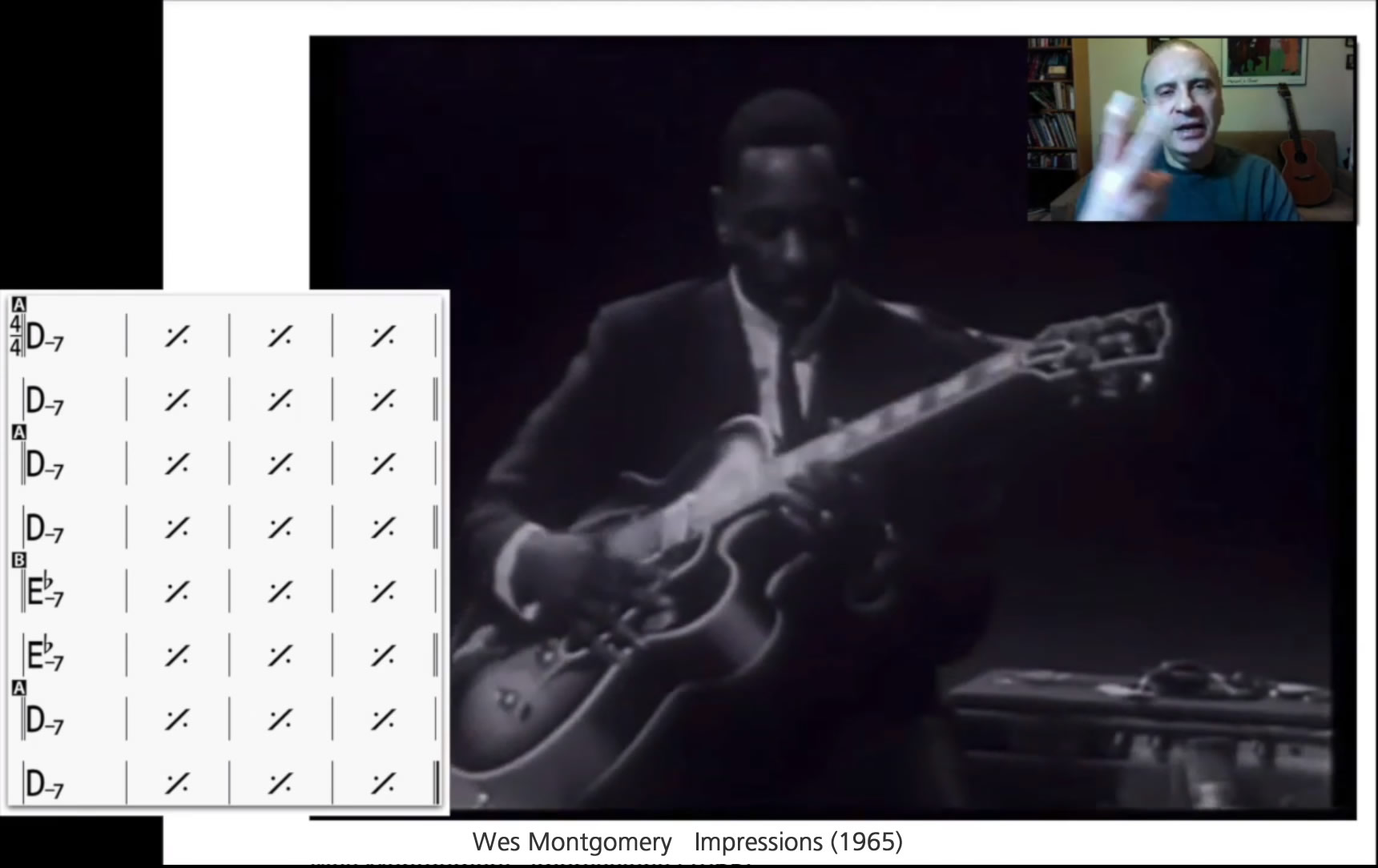 So in this 4th episode of Active Listening in Jazz we started understanding the 32 bar form. The 32 bar form is typically set up as this A, A, B, A format as we saw in ‘So What’ and ‘Impressions’ another variation on ‘So What’ and we will see that same form repeats in many, many Broadway tunes that have come to be known as standards.

And this form is something that once you let get into your ear you will start to hear a whole new dimension in Jazz that will be similar to as an example from a different medium ~ if you see somebody playing a game that has 7 decks of cards. If you look at it it might mysterious, but if you know the rules of solitaire then you what they’re doing.

And similarly if you at somebody filling in a 9 by 9 grid of numbers it might look like they’re doing something useless until you realise the rules of sudoku and then you know they’re doing something very creative and very intelligent and keeping track of a lot of things in their mind. And trying to create something that has a certain logic to it.

And similarly in Jazz although its an art form and obviously the end result is whatever you consume and either you enjoy it or you don’t enjoy it. But there are also layers of intellectual creativity that go in the process of creating Jazz and the more you understand the rules of how musicians are thinking about what they are doing the more you can enjoy different layers of the complexity in the music.

See my Active Listening in Jazz for Non-Musicians Youtube Playlist.
Subscribe to the playlist to catch new episodes.