Hanukkah At The White House

The White House Hanukkah Party is an annual reception held at the White House and hosted by the U.S. President and First Lady to recognize and celebrate the Jewish festival of Hanukkah. The tradition was established in 2001, during the administration of George W. Bush. The guest list includes hundreds of American Jewish politicians, organization heads, and school and yeshiva deans. Here are President Obama’s opening remarks at this year’s party which took place on Dec. 17, 2014:

At the same event, Rabbi Angela Buchdahl said the following words: “Our founding fathers aspired to build a country that was truly a place of religious freedom and equal opportunity for all people. But I have to predict that they could not have imagined that in 2014 there would be a Female Asian-American Rabbi lighting the menorah at the White House for an African-American president…”

The Wikipedia article about the event gives as background the story of a Jewish soldier who fought in George Washington’s army at Valley Forge in 1776:

The historical source for the above story is a second-hand account, but is nonetheless fairly credible. In December, 1778, General George Washington had supper at the home of Michael Hart, a Jewish merchant in Easton, Pennsylvania. It was during the Hanukkah celebration, and Hart began to explain the customs of the holiday to his guest. Washington replied that he already knew about Hanukkah. He told Hart and his family of meeting the Jewish soldier at Valley Forge the previous year. (According to Washington, the soldier was a Polish immigrant who said he had fled his homeland because he could not practice his faith under the Prussian government there.) Hart’s daughter Louisa wrote the story down in her diary. 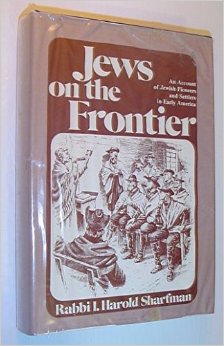 The story has been quoted by several Jewish historians, including Rabbi I. Harold Sharfman in his 1977 book, Jews on the Frontier. 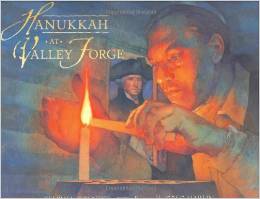 The children’s book Hanukkah At Valley Forge tells the same story. The author’s disclaimer is given below as well.

In recent years, a letter has surfaced which claims to have been written by the Jewish soldier himself. The letter is probably not real, but it does convey the story in an emotional and inspiring way. Here is the text of the letter: 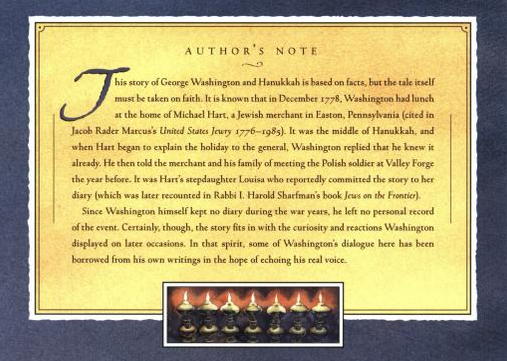 It is Hanukkah in the year of 1776. The winter is hard and the cold is fearsome. We are starving for bread. We have no clothes to warm our bodies and no shoes for our feet.
At these moments, I am reminded of my father in Poland. I recall how much he suffered at the hands of the cruel Baron. I remember I was but a youngster and saw my father dance before the Baron. How terrible was the sight. My father was made to dress up in the skin of a white bear and he danced for the sport of the Baron and his guests. How great is my pain and shame. Father dances as a bear and the Baron jests and revels. I affirm in my heart that I will never be so humiliated myself. At my first opportunity, I set sail to America.

It is now the first night of Hanukkah. This very night, two years ago, I fled from my father’s home in Poland. My father gave me a Hanukkah menorah and said, “When you will light, my son, these candles for Hanukkah, they will illuminate the path for you.” From that day on, my menorah was as an amulet. Wherever I go, I take it with me.

Suddenly, I feel a soft, tender hand upon my head. I lift my eyes, and behold it is him, in all his majesty, General George Washington standing upon me. He asks me, “Why soldier do you cry? Is it then so very cold?”

I forgot at that moment that I am a soldier in the presence of my superior, and spoke before him as a child to a parent. “My master the General,” I said. “I cry and pray for your victory. I am certain with the help of God, we shall prevail. Today, the enemy is strong; tomorrow they will surely fall, for justice is with us. We seek to be free in this land; we desire to build a country for all who flee from oppression and suffer abroad. The Barons will not rule here. The enemy will falter and you will succeed.”

The General shook my hand. “Thank you, soldier,” he said, and sat at my side next to the menorah. “What is this?” asked the General. I told him I brought it from my parent’s home. Jews the world-over light this menorah to celebrate the great miracle of Hanukkah and the miraculous salvation of the Jews. The light of the Hanukkah menorah danced in the eyes of General Washington as he called forth in joy, “You are a Jew from the children of prophets and you declared that we shall prevail.” “Yes my master,” I answered with confidence. We will be victorious as the Maccabees of old, for our own sake and the sake of all who follow us to build a new land and a new life.

The General got up; his face was ablaze. He shook my hand and disappeared into the darkness. My faith was rewarded, victory was achieved, and peace reigned in the land. My General became the leader of our new country, and I became one of its citizens.

I quickly forgot those frightful days and nights at Valley Forge. However, that first night of Hanukkah, with General Washington, I carried in my heart always as a precious dream.
The first night of Hanukkah the following year of 1777, I was sitting in my house in New York on Broome Street, with the Hanukkah light in my window. Suddenly, I heard a knock on the door. I opened the door, and incredibly, my General, George Washington is standing in the doorway. “Behold, the wondrous flame, the flame of hope of all Jewry,” he called forth in joy as he gazed upon its light.

The General placed his hand upon my shoulder and said, “This light and your beautiful words lit a flame in my heart that night. Surely, you and your comrades will receive due recognition for all of your valor at Valley Forge. But this night, accept from me, this medallion.” He hung the medallion of gold upon my chest and shook my hand. Tears came to my eyes; I couldn’t say a word. The General shook my hand once again and left the house.
I stirred as if coming from a beautiful dream. I then looked upon my medallion and saw a beautiful engraving of a Hanukkah menorah with the first candle lit. Below was written, “As an expression of gratitude for the candle of your menorah.”

Several articles claim that this medallion is part of the permanent collection in the Jewish Museum in New York. I have yet to verify this myself.