The Wannsee Conference was a meeting of senior officials of Nazi Germany, held in the Berlin suburb of Wannsee on January 20, 1942. The purpose of the conference, called by SS-Obergruppenführer Reinhard Heydrich, was to ensure the cooperation of administrative leaders of various government departments in the implementation of the final solution to the Jewish question, whereby most of the Jews of German-occupied Europe would be deported to Poland (“the East”) and exterminated.

This past summer I visited the Wannsee Villa with my family, so today I would like to describe that visit to you, and share with you some of the pictures I took.

The Wannsee villa is located on the shores of Lake Wannsee, a pastoral lake surrounded, on some sides by posh greenery and trees, and, on others, by boat basins and beaches. It is a considered a resort area. 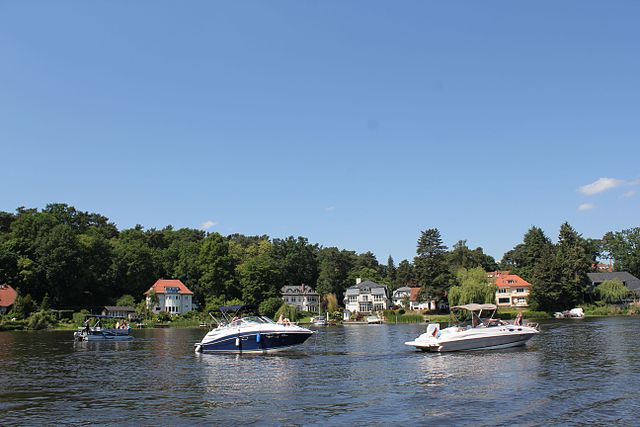 It is only about 30 minutes drive from the center of Berlin: 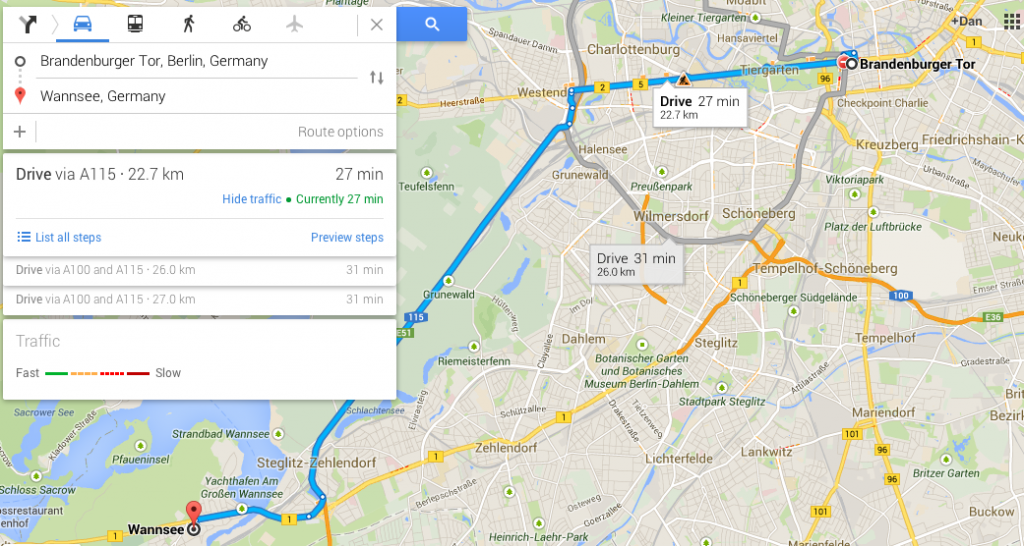 The villa is located on a quiet street, and other than some tour busses, you might easily pass it by without noticing it. On the outside, you are greeted by a nondescript sign: 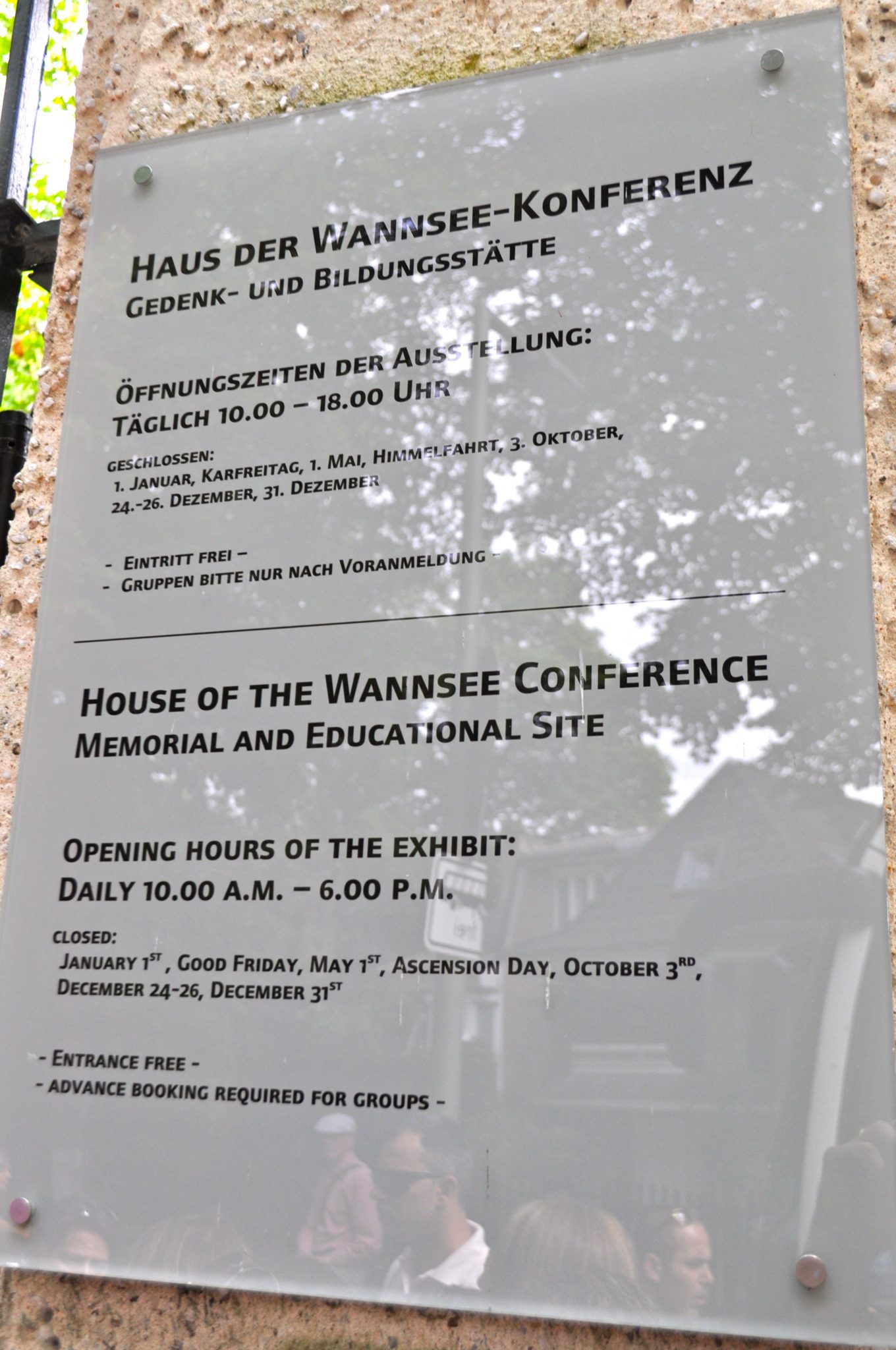 Once you enter the gate to the street, which completely hides the villa, you enter the front garden.
At this point, you can read a bit of general history about the location: 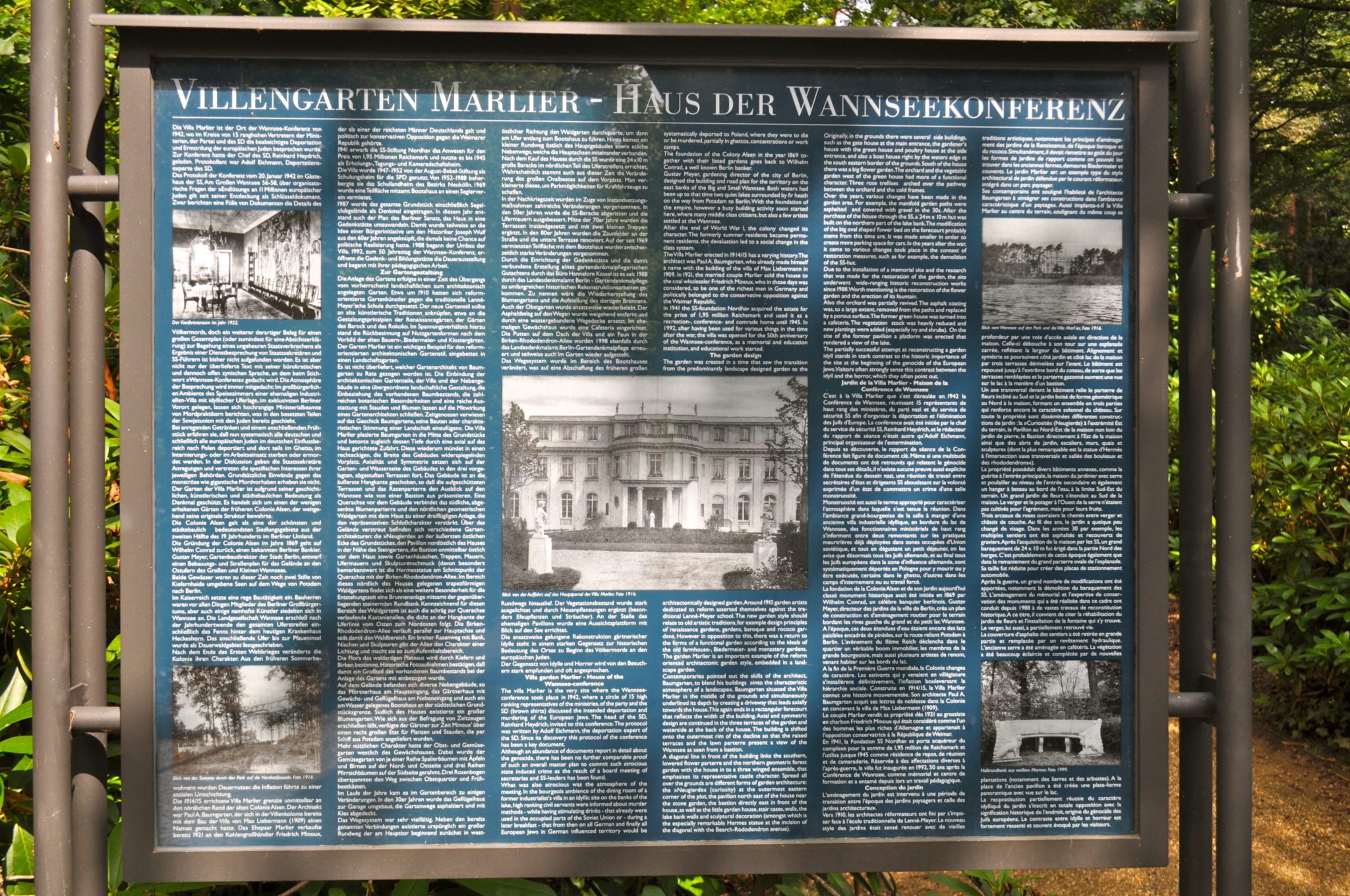 You stroll past the serene tree-lined garden, and then you finally catch your first glimpse of the villa. If, like me, you have read many books and watched movies and testimonials about what took place here, you will probably feel shivers up and down your spine as you see the villa and the driveway, where, one by one, the top leaders of the SS got out of their black German cars to discuss the extermination of the Jews of Europe. 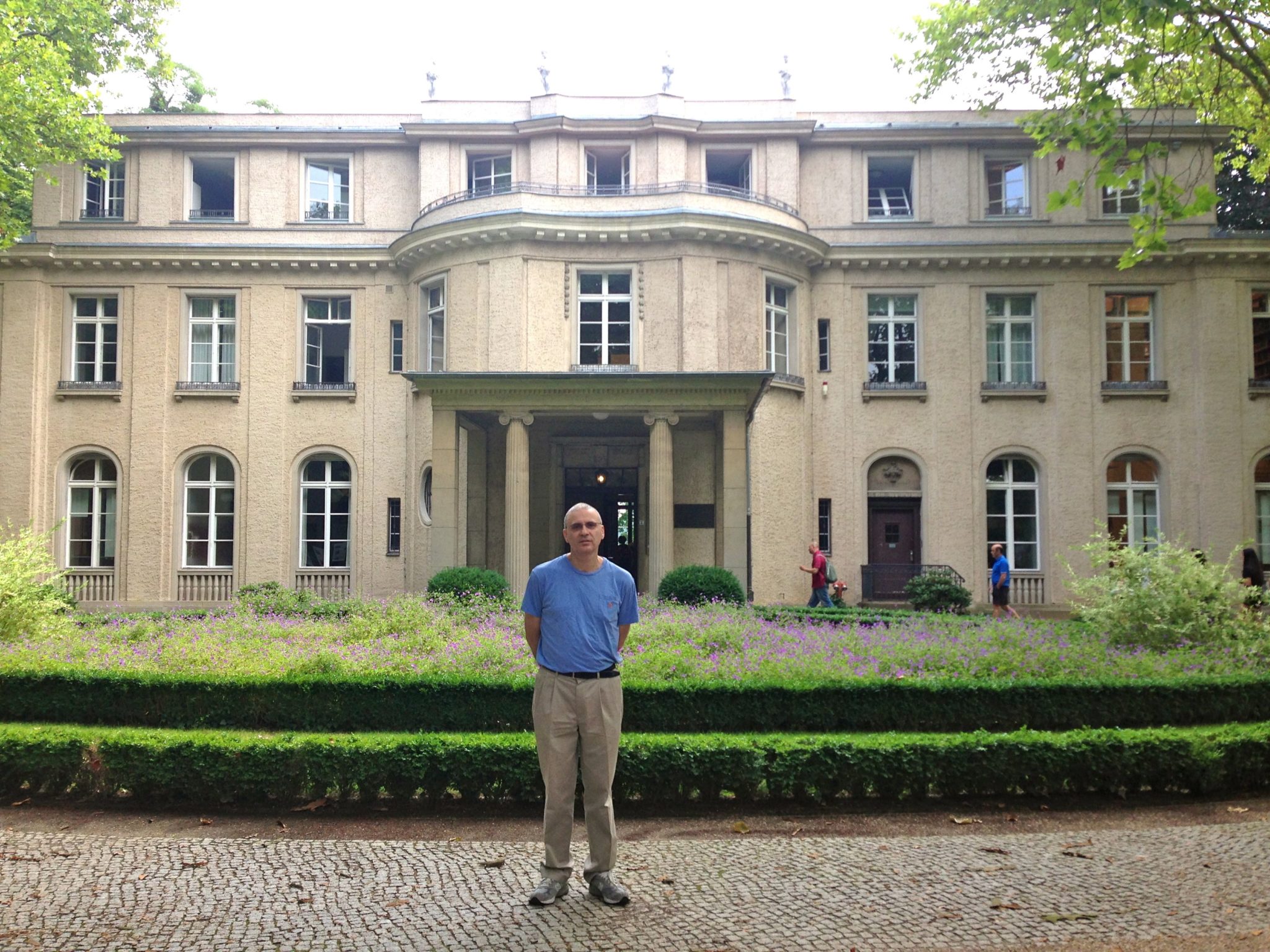 The back of the beautiful villa has a groomed garden with statues and overlooks the lake. The calm exterior gives no hint as to the sinister decisions that were taken inside on that cold January morning in 1942. 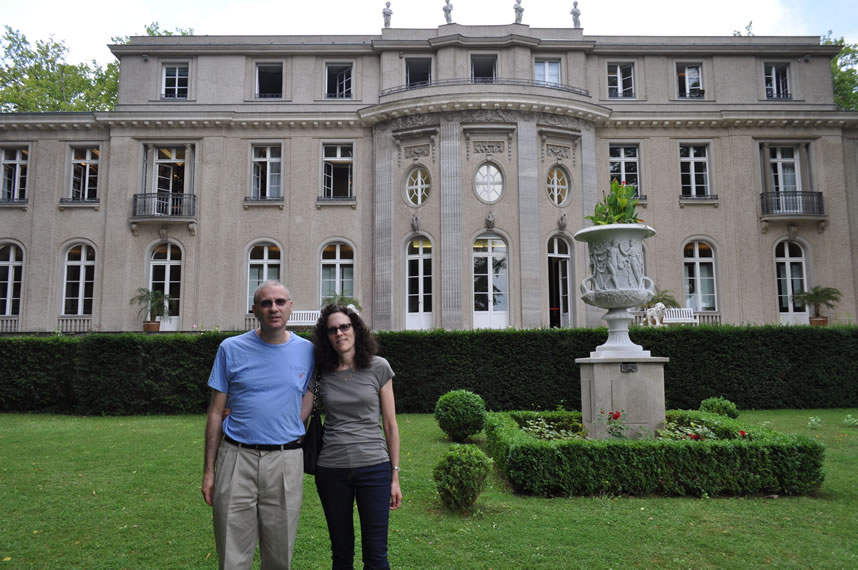 Once you enter the villa, the sign explains that this is a museum of “The Wannsee Conference and Genocide of the European Jews”: 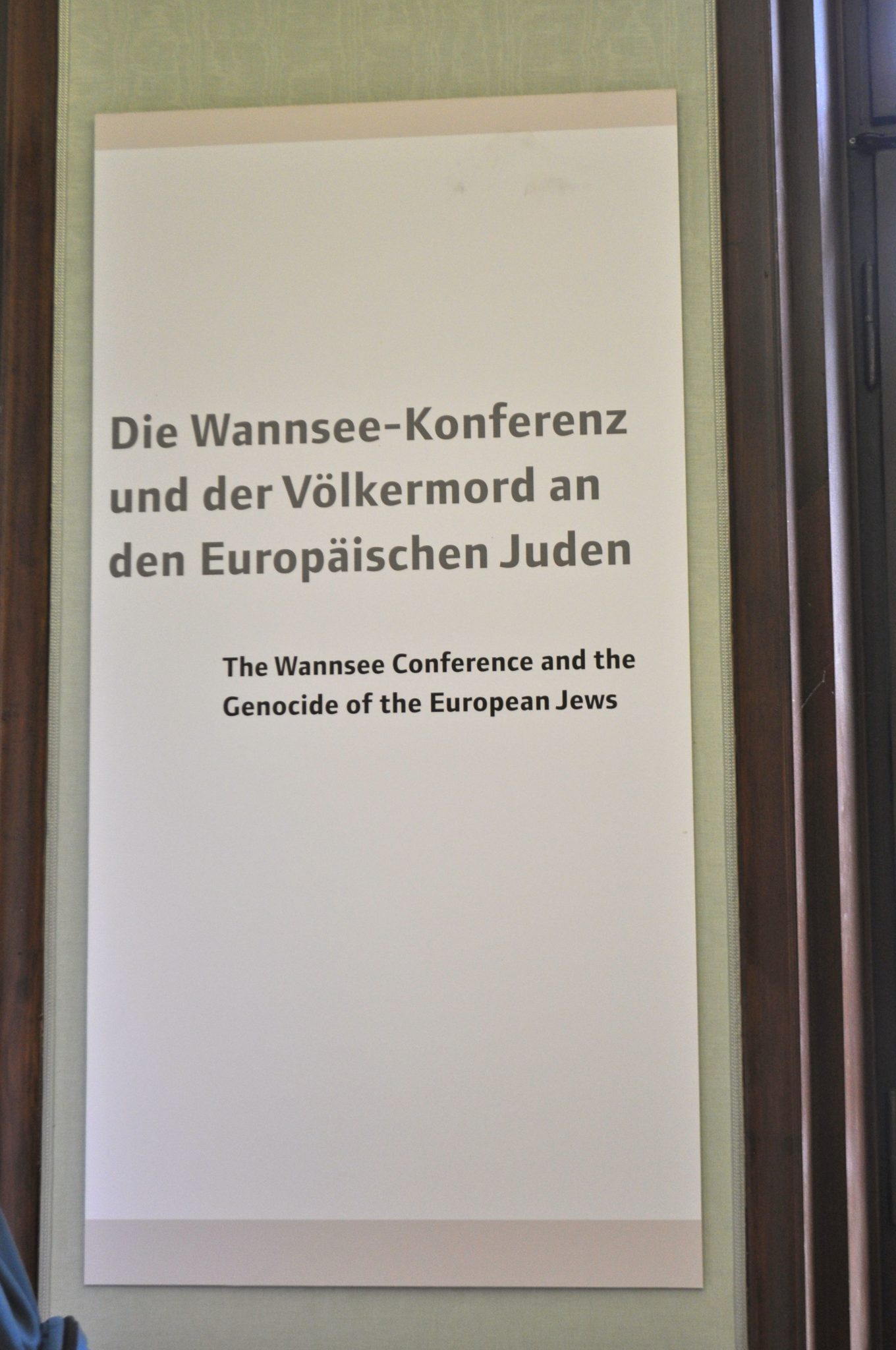 The ground floor of the villa has been converted into a museum and educational center. If you hire a guide, you should know that museum rules do not allow the guide to give any audible explanations inside the villa. So, there is an eerie silence as people walk through the rooms. Most are stunned by what they see. Each document shown on display is stamped with a seal of authenticity.

First, you can find the original invitation. The original conference was scheduled for December 9, 1941 and its goal was to reach “agreement on all aspects connected with this final solution among the central agencies concerned…especially because as of 15 October 1941 Jews are already continuously being evacuated from the territory of the Reich…to the East“:

But the meeting didn’t actually occur on December 9th, 1941 as planned. Can you guess why?

Well, the meeting was postponed because, as every American knows, on December 7th, 1941 the Japanese bombed Pearl Harbor!

The updated invitation, signed by Heydrich, says: “I had to cancel the meeting about the final solution of the Jewish question and related matters originally scheduled for December 9, 1941 at short notice because of events that were suddenly announced and which therefore made it impossible for some of the gentlemen to attend. As matters for deliberation no longer permit any further delay I am inviting you once again to a discussion followed by breakfast on January 20, 1942 at Wannsee…”

Below, I am standing in front of a wall that has the pictures and bios of the key Nazi leaders who attended the conference. You can read in more detail about each of them here.

Above their head is the most famous artifact of the Wannsee Museum: the original poster detailing the number of Jews in each European country adding up to 11 Million:

A close-up of the poster shows its meticulous detail and thoroughness: there was an accompanying coversheet which explained that the number of Jews has been rounded to the nearest hundred for clarity, while the Russian numbers are given without rounding.

The first part of the meeting was a quick summary of all the methods that have already been tried by Germany to solve the Jewish question.

First among the “failed” solutions to the Jewish problem was deportation. Some of this appears in the Minutes of the meeting as well, but here are some documents related to a lesser known “solution”: The Madagascar Plan.

The idea was very simple. Since Jews and Africans were both considered inferior races according to Nazi racial policy, it was only natural, in their sick minds, to try and relocate the Jews of Europe to Africa. There is an entire folio at Wannsee analyzing possibilities of resettling Jews in Africa.

With Hitler’s approval, Adolf Eichmann released a memorandum on 15 August 1940 calling for the resettlement of a million Jews per year for four years in Madagascar, an island off the eastern coast of Africa:

with the island governed as a police state under the SS. Here you can see two pages out of a long document prepared and signed by Franz Rademacher detailing the plan 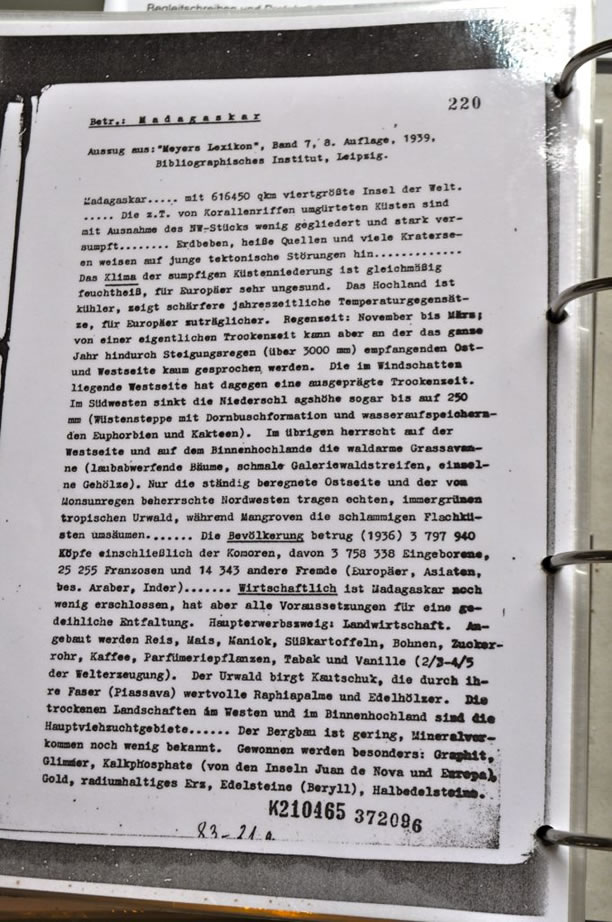 The implementation of the Madagascar Plan was postponed when the Germans failed to defeat the British in the Battle of Britain in 1940, and was subsequently never implemented as the Nazis shifted from a policy of forced emigration to extermination.

The rest of the exhibit deals with the minutes of the meeting. 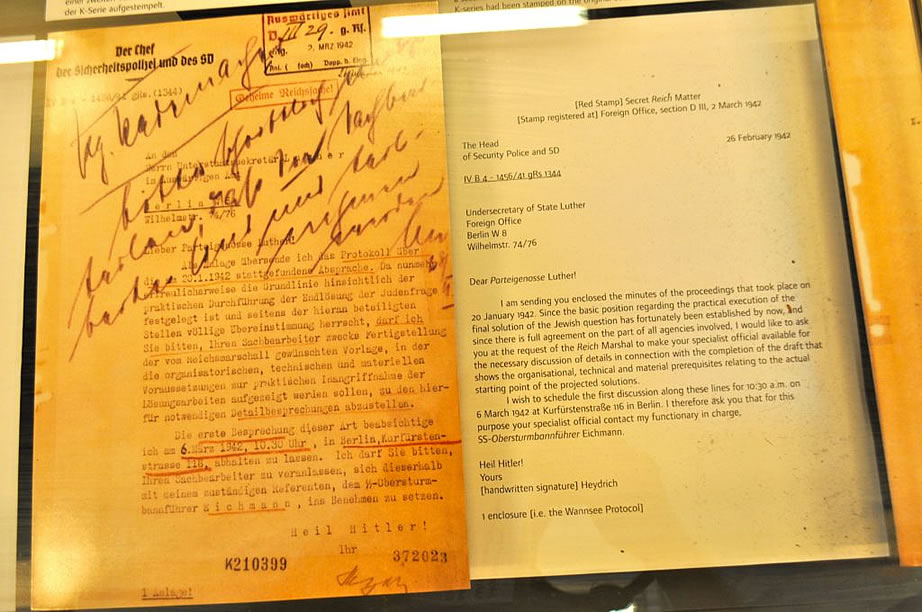 “Since the basic position regarding the practical execution of the final solution of the Jewish question has fortunately been established now, and since there is full agreement on the part of all the agencies involved, I would like to ask you…to make your specialist official available for the necessary discussion of details in connection with the completion of the draft that shows the organizational, technical and material prerequisites relating to the actual starting point of the projected solutions”.

In his trial in Israel in 1961, Adolf Eichmann was questioned about Wannsee. He explained that Heydrich (who signed the minutes) asked him to write the minutes and “sanitize” them of all details. You can read Eichmann’s full testimony on the matter here.

Here is an excerpt from Eichmann’s testimony about the details he had to remove from the official protocol of the meeting:

Presiding Judge: … Now in connection with the Wannsee conference, you answered my colleague Dr. Raveh that this part of the meeting, which is not mentioned in the protocol, the discussion was about means of extermination. Systems of killing.

Q: Who discussed this subject?

A: I do not remember it in detail, Your Honor. I do not remember the circumstances of this conversation. But I do know that these gentlemen were standing together, or sitting together, and were discussing the subject quite bluntly, quite differently from the language which I had to use later in the record. During the conversation they minced no words about it at all….they spoke about methods for killing, about liquidation, about extermination. I was busy with my records. I had to make the preparations for taking down the minutes; I could not perk up my ears and listen to everything that was said… 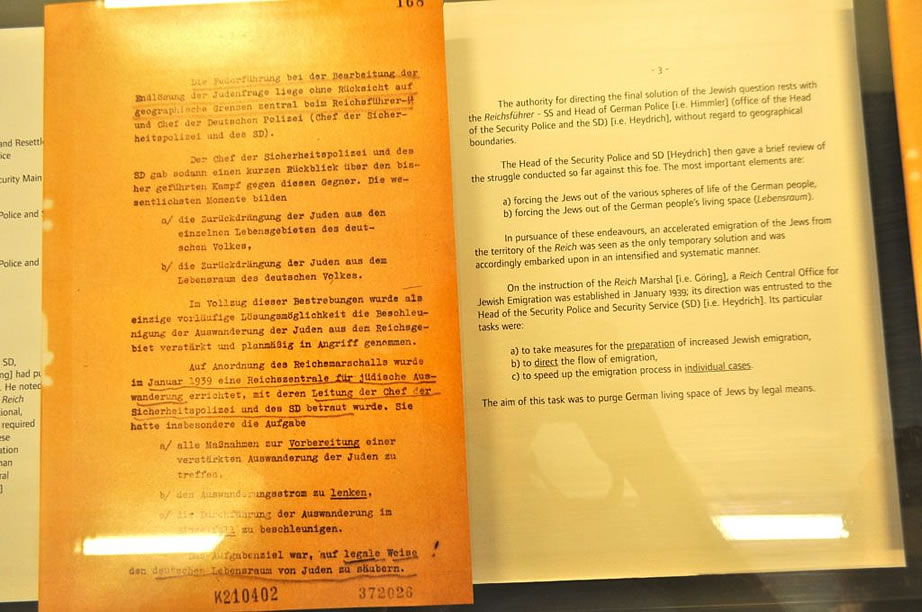 Page 4 explains how the Germans got the Jews to pay for their own emigration: 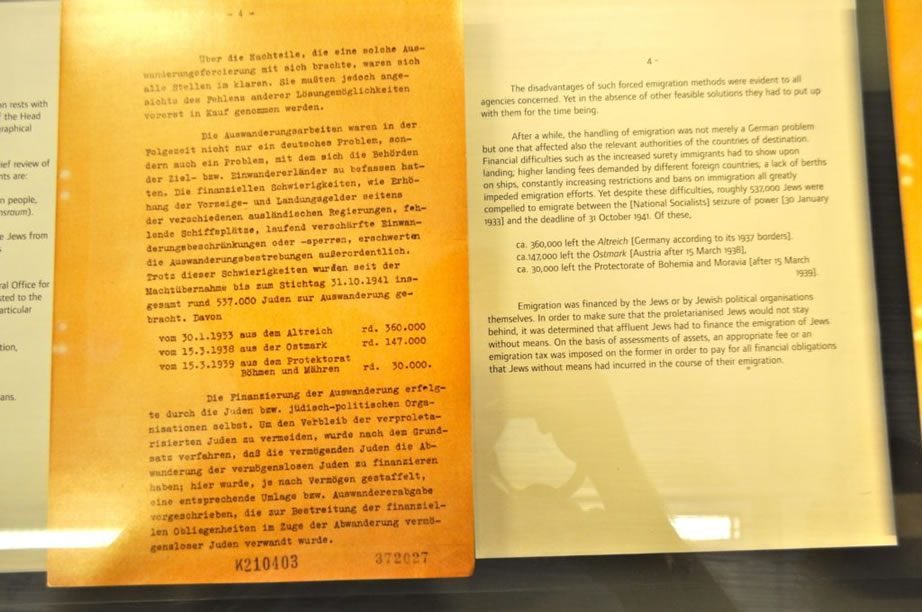 The same page laments how other countries’ “constantly increasing restrictions and bans on immigration all greatly impeded emigration efforts. Yet despite these difficulties, roughly 537,000 Jews were compelled to emigrate from 1933 to 1941…”.

The bottom part of page 4 explains how the Germans financed the forced emigration of Jews: “Emigration was financed by the Jews or by Jewish political organizations themselves. In order to make sure that proletarianized Jews would not stay behind, it was determined that affluent Jews had to finance the emigration of Jews without means…”

As if this were not enough, page 5 goes on to explain how $10 Million dollars were raised by foreign Jews to finance the emigration of Jews out of Germany: 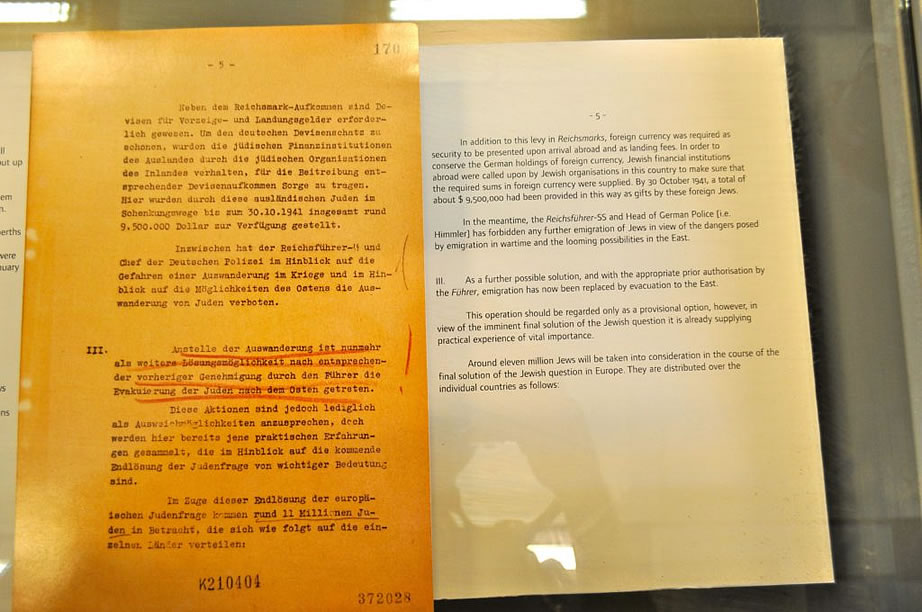 However, even this extortion was not enough to solve the problem and on Page 5 the first mention of the final solution emerges: “In the meantime, Himmler has forbidden any further emigration…due to the looming possibilities in the East”.

And then section III gets more explicit: “As a further possible solution , and with the appropriate authorization by the Fuhrer, emigration has now been replaced with evacuation to the East. This operation should be regarded only as a provisional option, however, in view of the imminent final solution of the Jewish question it is already supplying practical experience of vital importance. Around 11 Million Jews will be taken into consideration in the course of the final solution of the Jewish question in Europe.”

At this point the minutes included the page shown above with the breakdown of Jews by country which adds up to 11 Million.

Page 7 anticipates some difficulties dealing with Jews in some countries, like Hungary and Rumania, where at that time Jews still had some rights: 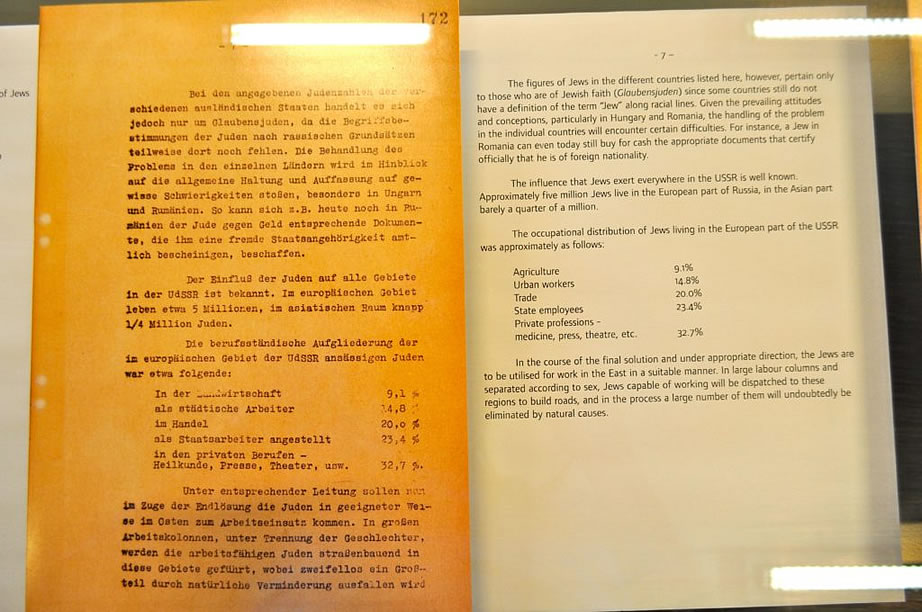 In the last paragraph on the page it says: “In the course of the final solution and under appropriate direction, the Jews are to be utilized for work in the East in a suitable manner. In large labor columns and separated according to sex, Jews capable of working will be dispatched to these regions to build roads, and in the process a large number of them will undoubtedly be eliminated by natural causes.”

On page 10 we are introduced to the problem of the Mischlinge, a German term used to denote “crossbreeds” who have both Aryan and Jewish ancestry. 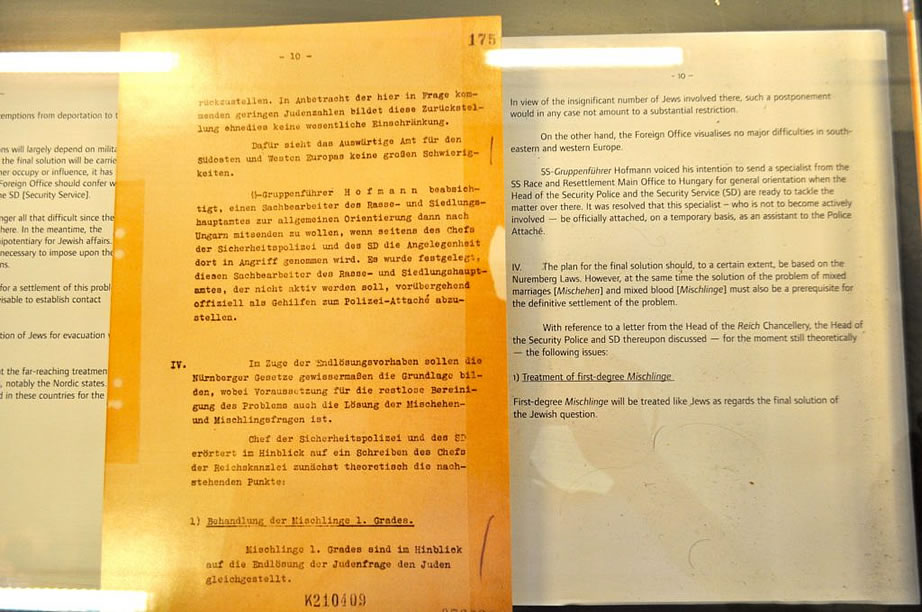 Page 10 concludes with: “First degree Mischlinge will be treated like Jews as regards the final solution to the Jewish question.”

Page 12, in typical German thoroughness, walks through some more esoteric cases of Mischlings and gives a guideline for second degree Mischlings: “If the racial appearance of a second-degree Mischlinge is particularly unfavorable, in which case he will be classed with the Jews purely on the basis of his looks”: 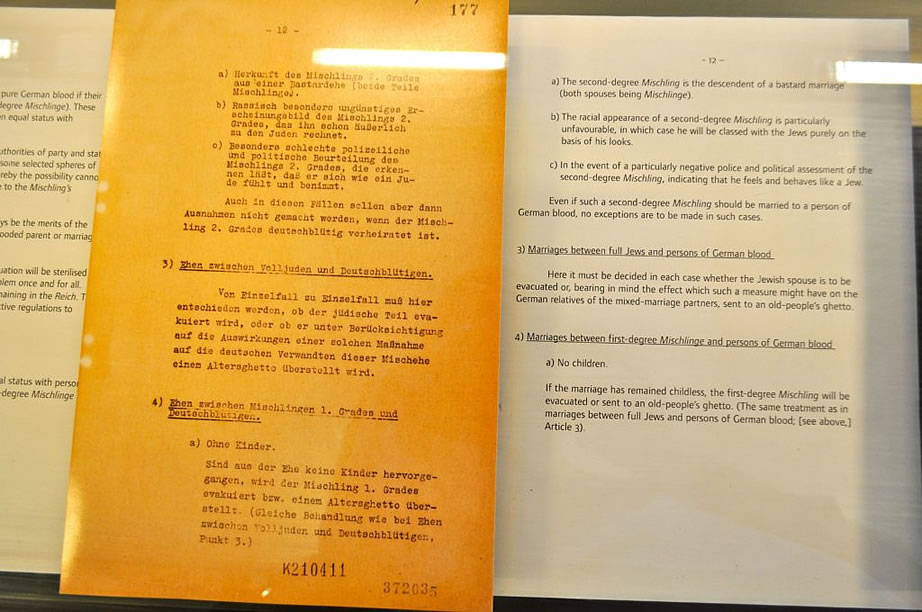 The exhibit also includes posters which were distributed to explain the racial mixed breed aspects of the Nuremberg Laws to simple citizens in plain graphical form.

Aryan blood is shown as white, Jewish blood is shown as black, and all possible mixtures up to the level of the grandparents on both sides are considered as polluting the purity of the Aryan race. Even one Jewish grandparent makes the person 1/4 Jewish (second degree Mischlinge), and those were to be judged by the “Jewishness” of their appearance. 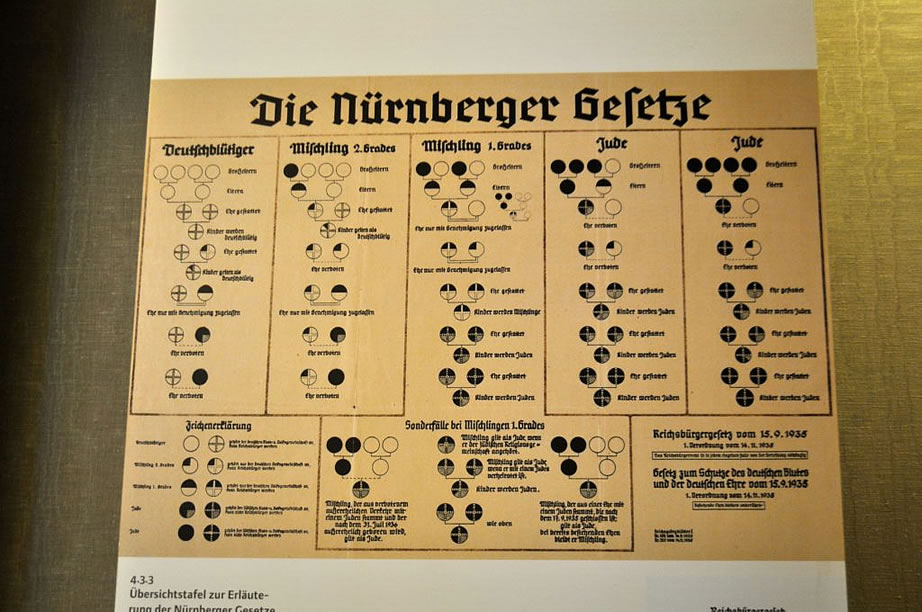 If you found that poster too confusing, a simplified version shows the Mischlings as black/white outline figures instead of circles: 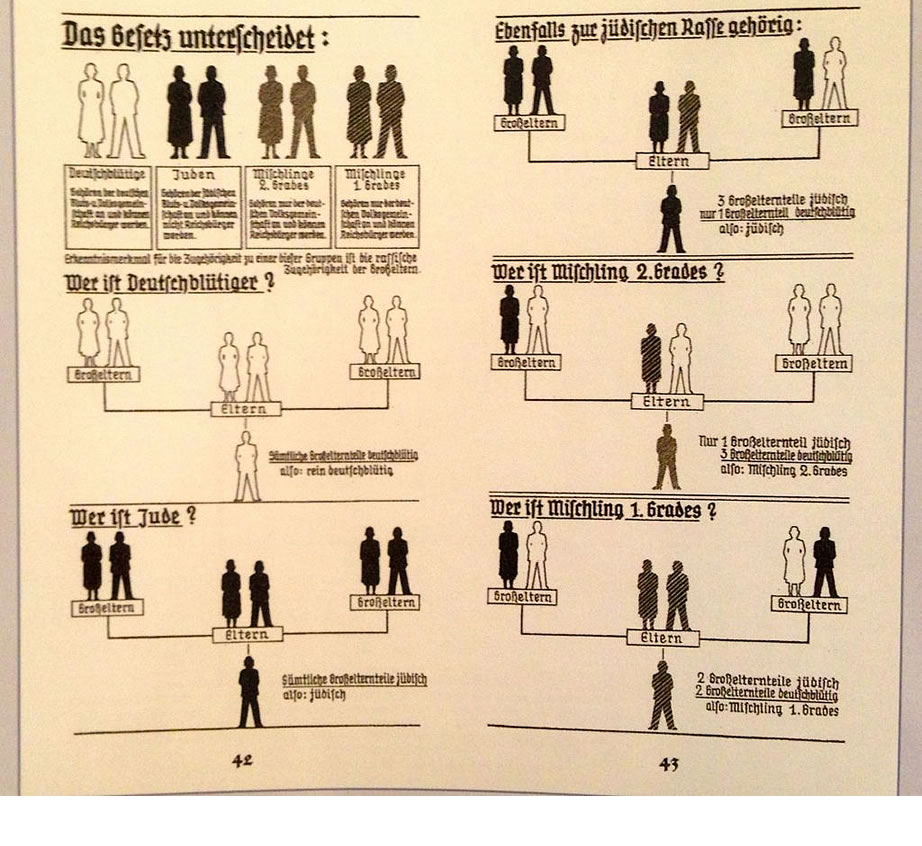 There is an excellent HBO film from 2001 called “Conspiracy” about the Wannsee Conference. The movie was written by Loring Mandel (inspired by viewing a 1984 documentary on the subject), directed by Frank Pierson, and featured an all-star cast, including Kenneth Branagh as Reinhard Heydrich and Stanley Tucci as Adolf Eichmann. Branagh won an Emmy Award for Best Actor, and Tucci was awarded a Golden Globe for his supporting role as Eichmann. You can view the entire movie here: 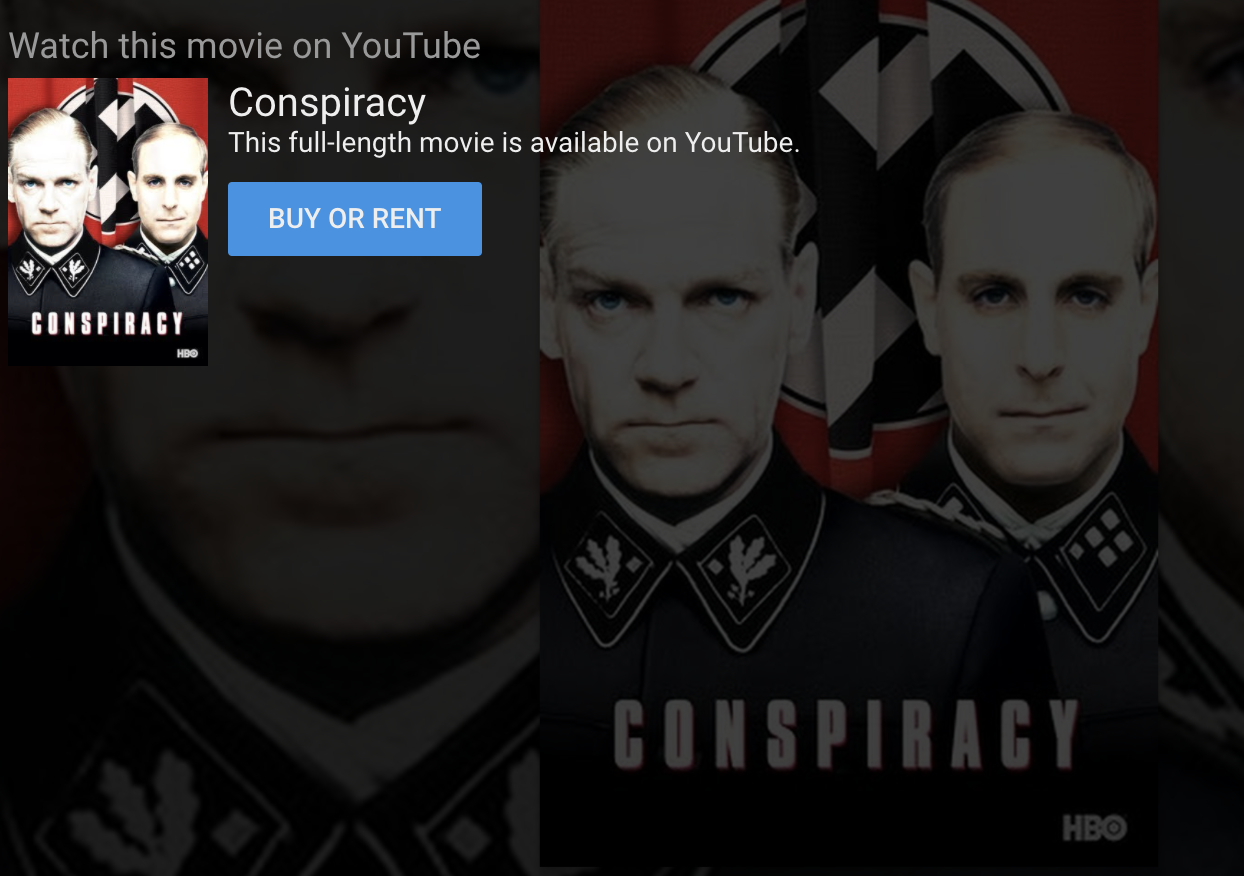