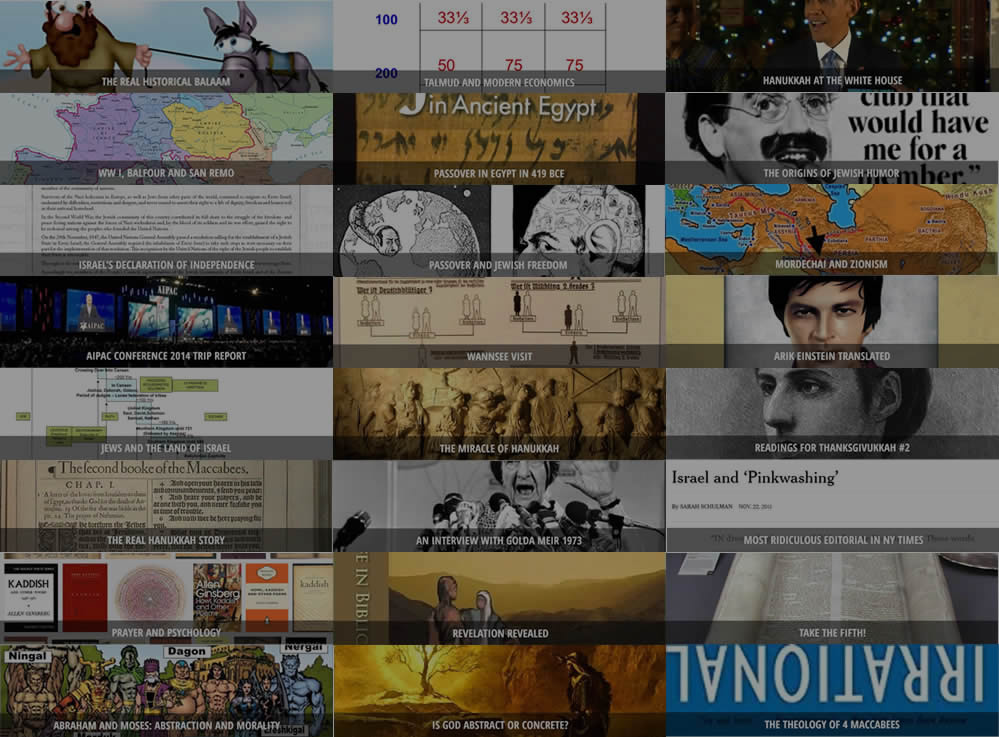 The story of Balaam is one of the most baffling portions in the Torah.  Read more

In the following series of video lectures, Professor Aumann an Israeli-American mathematician and professor at the Center for the Study of Rationality in the Hebrew University of Jerusalem in Israel makes some very interesting connections between the Talmud and modern economic theory.  Read more

The White House Hanukkah Party is an annual reception held at the White House and hosted by the U.S. President and First Lady to recognize and celebrate the Jewish festival of Hanukkah. The tradition was established in 2001, during the administration of George W. Bush. The guest list includes hundreds of American Jewish politicians, organization heads, and school and yeshiva deans. Here are President Obama’s opening remarks at this year’s party which took place on Dec. 17, 2014:    Read more

However, there is a misconception that the Balfour Declaration was just a letter of intent, and not a binding legal document.    Read more

Many biblical scholars tell us that, so far, there is little or no archeological evidence of Israel’s exodus from Egypt and the periods which preceded it. Some scholars also doubt Joshua’s wars and even the scale of the Davidic monarchy.  Read more

Israel’s Declaration of Independence
6 May, 2014

Israel’s declaration of independence took place at Independence Hall in Tel Aviv. It has been restored into a museum, and the most surprising thing for me, when I visited it, was how small it is.    Read more

Halfway between Dayenu and the Meal lies the key phrase of the entire Seder:

When we read this in 21st century America, it sounds like a distant metaphor. You can find any number of Rabbinical sermons about “finding your own Egypt”, i.e. freeing yourself of some form of self-inflicted slavery to gadgets, money, peer approval, etc.    Read more

Today is Purim, so I thought I would explore the connection between the story of Megillat Esther and the revival of Jewish life in Judea and Jerusalem following the Babylonian exile, sometimes called the Return to Zion of 538-444 BC.

First, you have to try and imagine the size and scope of the AIPAC conference.        Read more

The purpose of the conference, called by SS-Obergruppenführer Reinhard Heydrich, was to ensure the cooperation of administrative leaders of various government departments in the implementation of the final solution to the Jewish question, whereby most of the Jews of German-occupied Europe would be deported to Poland (“the East”) and exterminated.     Read more

Here are some songs made famous by the great Arik Einstein, with my own translation of the lyrics.

I chose to stay close to a literal translation in order to match the Hebrew text line-by-line, so that it could be used in a sing-along situation. I did not try to emulate meter or rhyme, except where it came naturally. I originally translated “אני ואתה” as “me and you” instead of “you and I”, but eventually I stayed with the more correct English form.         Read more

The subject of Jewish textual continuity, or the “textline” (analogous to bloodline), has recently been introduced by secular Israeli novelist Amos Oz and his daughter in a fantastic and innovative joint book called Jews and Words.           Read more

The Miracle of Hanukkah
1 December, 2013

In 1 Maccabees Chapter 4, the eight days of Hanukkah are said to begin on the 25th of Kislev (as we currently celebrate it), and the reason given for the eight day period of celebration is that the Maccabees celebrated “the dedication of the altar eight days”. So, חנוכת המזבח, as it appears in the song Maoz Tsur is given as the main reason for the holiday.     Read more

The second reading I chose for the once-in-a-lifetime combination of Thanksgiving and Hanukkah dinner were two poems by Emma Lazarus.

It is unfortunate that Jews are rarely exposed directly to the books of Maccabees, as these books are the primary sources for one of the most important chapters in Jewish history: the struggle for independence that led to an independent Hasmonean Jewish state which lasted for ~100 years until the Roman conquest in 63BC. It was the last independent nation state ever to exist in the land of Israel until 1948.          Read more

I am never surprised to see an anti-Israeli editorial in the New York Times, but the Pinkwashing article this week by Sarah Schulman was probably the most ridiculous one I’ve seen in many years.         Read more

In previous posts I proposed some non-mystical ways of thinking about the Jewish God which may appeal to people who view themselves as atheists or agnostics.

My goal is not to try and persuade people who do believe in God to change their conception. Quite the opposite. My goal is to show Jews who do not believe in God that Judaism has something rich and rewarding to offer them as well.     Read more

What if, instead of the story we all know about how Bill Gates bought the DOS operating system from IBM, a different press-release had been circulated?  One saying that God had revealed himself to Bill, and showed him a field full of glowing faces, and told him that someday all dwellers of the earth would spend 10 hours a day in front of boxes that would make their faces glow, and each of them would pay him a tax for that privilege?     Read more

I concluded in a previous post that the Jewish God is abstract. As an analogy, I offered the mathematical concept of ∞ or the imaginary number i (defined as √-1), which we cannot conceptualize directly based on our experience in the physical world.         Read more

I am starting my discussions of Post-Modern Jewish Theology from an unlikely place.

With Hanukkah 2013 just behind us, this is as good a time as any to present my own way of reading the theology expressed in the 4th book of Maccabees.     Read more

I have lived half my life in Israel and, so far, the other half in the U.S. (New York, to be more specific).

In this blog, I’m going to capture some random thoughts on issues that seem relevant to me given this background.